Miter Saw vs Table Saw – Which Saw Makes the Cut?

If you’re looking for a serious DIY tool, you’ve probably heard of miter saws and table saws. Miter saws and table saws are some of the more common and popular power tools that you can easily find in any home improvement store or workshop. Whether you are new to these saws or confused as to which is more suitable for you, you’ve come to the right place to find out more. In this article, I will give you an overview of the miter saw and the table saw, a detailed comparison of these two saws, as well as my assessment of which saw is the better of the two when it comes to specific needs.

At A Glance: Miter Saw vs Table Saw

As the name suggests, a miter saw is used to cut miters. Miters, otherwise known as miter joints, are basically joints formed by bevelling each of two parts to be joined to make a corner. Miter saws are also used to produce cross-cuts (i.e. across the width) in a workpiece. Long rip cuts (i.e. lengthwise cuts) are not possible with a miter saw. Miter saws usually come in handy for framing operations and mould cutting.

The miter saw produces cuts through a spinning circular saw blade that is pulled down onto a workpiece in a short and controlled motion. To ensure that the cutting angle is accurate, the workpiece is usually held against a fence. The standard position for the angle of the blade is 90°. The degree of this angle can be adjusted relative to the fence with the miter index. Typically, miter saws are designed to allow precise one-degree incremental adjustments to the miter index. There are also miter saws that come with designated “stop” positions for the miter index to be quickly adjusted to commonly used angles, such as 15°, 30° and 45°.

For a visual illustration of the miter saw, you can check out this YouTube video by the WoodWorkers Guild of America.

The table saw also comes with a circular saw blade but it has a different design from the miter saw. The circular saw blade is mounted on an arbour which is either driven directly by an electric motor or indirectly by a belt or gears. The saw blade sticks out through a table surface which provides support for the workpiece that is being cut. Unlike the miter saw, the hook on the teeth of the table saw operates by continually pulling the workpiece towards the blade.

In the modern table saw, the depth of the cut can be varied by adjusting the saw blade up and down. If the blade is positioned to protrude higher above the table surface, it will make a deeper cut in the workpiece. Earlier table saws had fixed saw blades and arbours, so the table had to be adjusted instead to change the protrusion of the saw blade. To control the angle of the cut, you will need to adjust the angle of the saw blade. This means that table saws can also be used to cut 45° angles. The problem is that most table saws come with rather unreliable and flimsy miter gauges. A sturdy miter jig or miter sled can help you overcome this issue and cut precise 45° angles with a table saw.

To give you a clearer picture of the similarities and differences between a miter saw and a table saw, here’s a detailed comparison when it comes to the various aspects that one would typically consider when choosing a saw.

Now that we have a better idea of the miter saw and the table saw, it’s time for a final showdown to decide which would be the preferred saw when it comes to different needs and purposes. 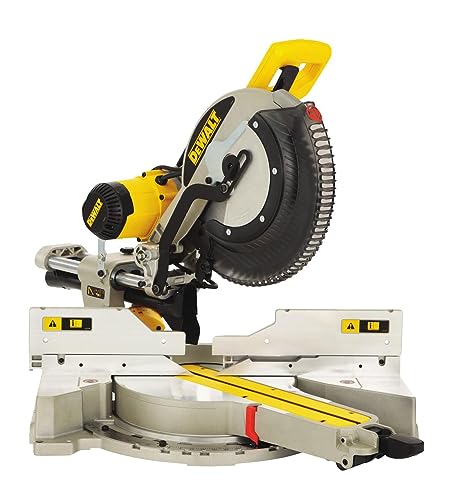 For beginners, a miter saw is relatively easier to operate as compared to a table saw. The DeWalt DWS780 is a good choice if you are looking for a versatile and precise power cutting tool. This miter saw comes with a big 12-inch blade and its sliding capability makes it suitable to cut small and large pieces of woodwork—it can cut pieces at a perpendicular angle that are up to 16 inches wide. This miter saw is also able to cut vertical bevels and horizontal miters at the same time, making complex cutting jobs much more manageable, which is a plus point for inexperienced users.

Other cool features include its XPS laser alignment system which works by casting a shadow of the saw blade onto the work surface, making for fool-proof precision. Its double bevel design also makes it easy to adjust angles on a high-visibility scale to get the bevel angles right before cutting. For a miter saw, customers have commented that its repeat cuts are surprisingly precise and easy to manage, thanks to its preset miter and bevel stops. Another smart design would be the miter saw’s see-through fence which resolves the issue of obstructed visibility due to the blade guard popping down continuously.

Priced just below $600, this miter saw is a good mid-ranged option for beginners without having to break the bank. 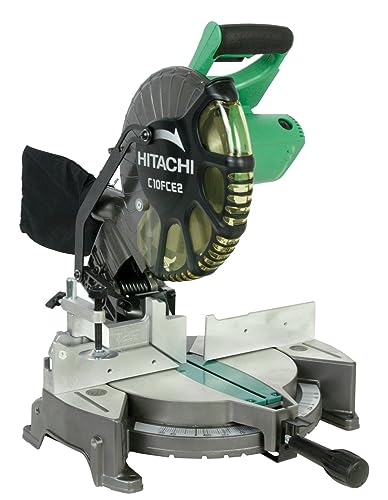 When it comes to lightweight and portable designs, miter saws beat table saws hands down. At just over 26lbs, the Hitachi C10FCE2 is one of the lightest compound miter saws that can be lifted without much hassle for vertical cuts. The built-in handle also makes it a breeze to move this miter saw around. It is also no more than 2 feet long and 19 inches wide, making it compact for transportation and storage.

With a 15-amp motor that can propel the blade up to 5,000 rpm, this is no lightweight miter saw in terms of its power and efficiency. Customers have commented that this nifty miter saw can handle various materials: hardwood, flooring and even aluminium. This miter saw comes with an automatic anti-kickback feature that reduces vibration and the noise when starting up the saw. The Hitachi C10FCE2 is also designed with a horizontal handle that has a vibration-reducing elastomer grip, making it easy to control the blade. This miter saw also comes with clamps, so you don’t need to hold the materials with your bare hands. With 9 thumb actuated miter stops, you can also easily choose the needed angle for precise cutting.

If you’re looking for a portable and compact power cutting tool, the Hitachi C10FCE2 should satisfy your needs. Another added bonus would be its affordability within the price range of $100 to $150. 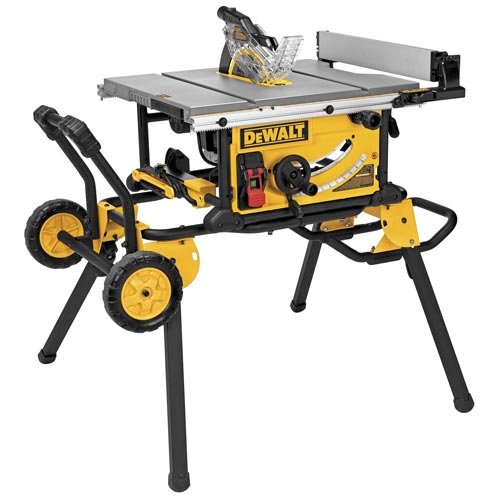 Besides miter saws, DeWalt is also reputed for its excellent table saws. The DeWalt DWE7491RS is a good choice if you need a decent power cutting tool for more complex DIY home improvement projects that cannot be done by a miter saw. For slightly over $500, you get a powerful 15-amp table saw that works well for most applications. This table saw can produce cuts ranging in depth from 3 ⅛-inch perpendicular cuts to 2 ¼-inch cuts at a 45-degree angle. Its 32 ½-inch rip capacity allows you to handle large rip pieces without breakage or tipping the saw over. This table saw is also equipped with an extendable and retractable fence rail to adjust it to the needs of your project. The DeWalt DWE7491RS also has a 2 ½-inch dust port that can connect to a vacuum for dust removal.

If your home improvement projects entail more complex tasks other than trimming, perpendicular and angled cuts, the DeWalt DWE7491RS is a great and reasonable option within the price range of $500 to $600.

Best For Your Buck 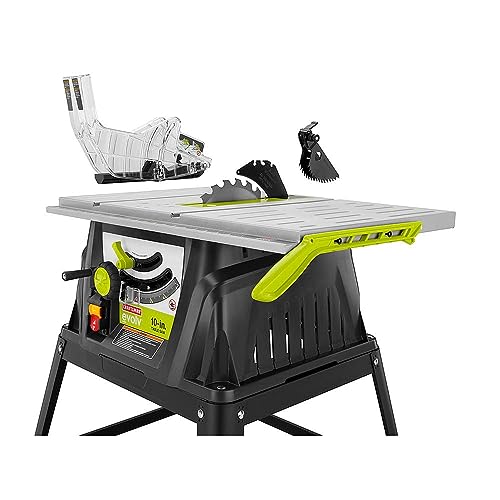 If you’re on a tight budget and cannot afford to buy both a miter saw and a table saw, I would suggest that you get a table saw which allows you to perform a wider range of cutting jobs. The Craftsman Evolv Table Saw 28461 is a powerful table saw with a very affordable price tag below $200.

Like the DeWalt DWE7491RS, the Craftsman Evolv table saw is also equipped with a 15-amp motor for handling tough materials with ease. For the price, its quality is quite impressive: the 10-inch blade is carbide-tipped and its table top is made of steel. The saw blade has a tilt range of up to 45 degrees to rip different angles and miters hassle-free. This table saw also comes with many great features like an adjustable miter gauge, anti-kickback pawls, a blade guard assembly, and a quick-to-mount-and-release rip fence. While its rip fence isn’t the most precise and the table isn’t as big as some of the other more expensive table saw models, the Craftsman Evolv table saw will do a decent job when it comes to ripping plywood sheets and joinery timbers. 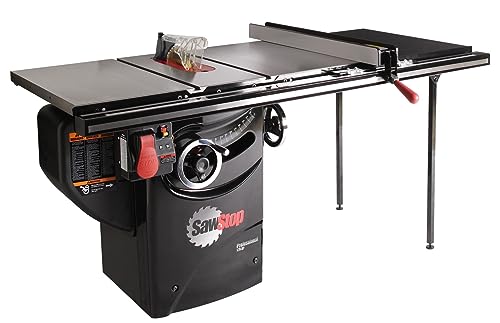 If you are a serious woodwork professional who engages in a variety of woodworking jobs, a table saw would most likely be a better option given its relative versatility. And if you have the means, the SawStop PCS175-TGP236 is worth your consideration. This 1.75-horsepower professional cabinet saw assembly comes with a 36-inch T-Glide fence system that provides smooth operation, precision measurement and a sure lockdown of material on the table without deflection. It also comes with rails and an extension table. The extension table extends from the side and is supported by the cabinet, which means that you don’t need to fumble around with folding legs that are typically used by other table saws.

The SawStop PCS175-TGP236 is also equipped with one of the best safety systems that can stop the rotating saw blade within milliseconds to prevent serious injuries. Other great safety features include its transparent guard assembly for visibility when you make cuts and bring the wood near the blade, as well as a riving knife that reduces kickback. In terms of debris control, this table saw also guarantees 99% dust collection both above and below the table top. The dust collection blade guard above the table traps and evacuates fine particles on the table. Below the table, the table saw has been designed such that the turbulent air from the blade delivers dust for collection in the 4-inch port. Other practical features include a left-tilting blade that allows you to make bevelled cuts without the wood or the blade binding against the fence or the rail. Although the table saw needs 110 volts to operate, it can also be reconfigured to work with 220 volts.

With a price tag that’s close to $3,000, the SawStop PCS175-TGP236 is not for those on a budget. However, it is a great investment if you are a serious professional when it comes to woodwork. To-date, all Amazon reviews of the product fall within 4-star or 5-star ratings, which is a testimony to the superb performance of this table saw. If you are looking for a professional wood cutting tool that offers great versatility and safety, the SawStop PCS175-TGP236 is a table saw that you should consider.

Taking all factors into account, the table saw is the overall champion when it comes to versatility and power. That would also explain why the table saw is generally more expensive than the miter saw. With the help of a miter jig or a miter sled, or a reliable miter gauge that comes with the table saw, you can perform precise angular cuts with a table saw. However, the converse cannot be said for a miter saw whose functions are mainly limited to making angular cuts in materials. If you only need a saw specifically for angular cuts, then the miter saw would be an obvious choice. If your needs are more general, a table saw is a costlier investment with a better pay-off because of the versatility it offers.

Best Home Theater Subwoodfers 2019: WE’RE ALL ABOUT THE BASS

Previous Post 5 Best Bench Grinder Reviews (Updated 2017) Next Post Best Vacuum Under $100: Cheap Vacuums That Are Worth The Buy

Thank you for subscribing.

we respect your privacy and take protecting it seriously